The Most Streamed TV Shows in the US

Almost 60% of the US now watches TV via internet streaming, either to replace or supplement cable or satellite service.

If a TV show isn’t available to stream in 2019, its very existence falls into question.

At HowtoWatch.com, we set out to determine the most-streamed—or most-searched—TV show of each state in the US.

First, we researched the most popular TV series across four major streaming platforms (Netflix, Hulu, HBO GO, and Amazon’s Prime Video) to create an initial list of 80 shows. Then, we plugged that lineup into Google Trends to pinpoint each state’s most popular TV show.

No contest: Netflix is America’s favorite streaming network. According to our numbers, an average of 73% of the US turns to Netflix for its streaming fix, with Hulu trailing at a distant 19.5%.

Surprisingly, despite being available to over 100 million Amazon Prime members, Prime Video nabs just a 6% average. HBO GO pulls only 3.5%—though that will likely jump when the final Game of Thrones season arrives. 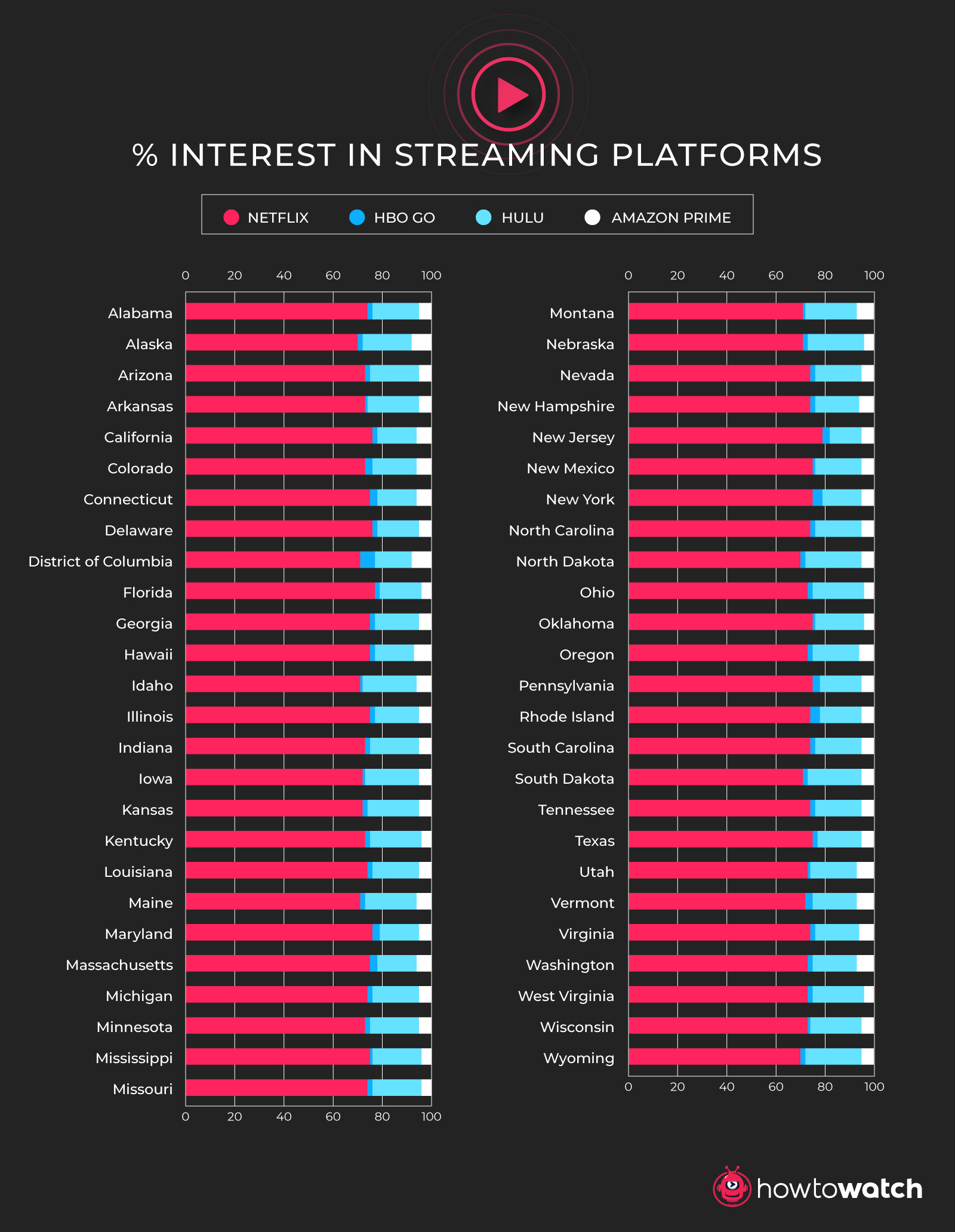 Orange is still the new black

Long-running women’s prison dramedy Orange is the New Black, the series that put Netflix’s original programming on the map, came out as the overall favorite belle of the cell block.

Even after six seasons—going on seven in 2019—the Jenji Kohan lockdown saga is still popular from Arizona to Wyoming.

Viewers are obviously interested in shows set in their own backyards.

In the ‘80s and ‘90s on NBC, Cheers, Frasier, and ER where broadcast ratings juggernauts—and three states still consider them Must See TV.

Likewise, pop-cultural phenomenon Lost and underdog favorite Friday Night Lights, both of which ended nearly a decade ago, are still drawing eyeballs.

Crime podcasts aren’t the only medium making a killing: murder-mystery streamers Mindhunter, Hannibal, The Sinner, and Making a Murderer turned up in several states.

Make what you will of California’s frequent searches for cocaine chronicle Narcos.

Oregon can’t choose between sci-fi classics Battlestar Galactica and The X-Files—and really, who can blame them?

Obscure legal drama Goliath made a surprisingly strong showing across disparate states Florida, Maine, and Montana. And oddly enough, The Kominsky Method spiked in Vermont despite its Los Angeles setting.

And we’re not sure what to think of Nevada’s affinity for Rick & Morty, or Rhode Island’s fervor for Flight of the Conchords. Only one has legalized marijuana the last time we checked.

The state(s) of streaming

As we said earlier: If it doesn’t stream, it’s not a thing. Streaming TV is exploding as fast as whatever entertainment platform blew up the internet previously—we’re going to say podcasts? These things move so quickly.

HowtoWatch’s research mirrors each state’s interest in specific streaming TV shows, but do you agree with our findings?

Let us know, and then pass this list along through social media to further the conversation. There’s still time before the final season of Orange is the New Black.