Well, let’s see. For binge-watching old TV shows? Most definitely. For new, original content? For sure. As a cable replacement? Not even a contender.

Basically, Netflix is amazing at getting you reruns of your favorite TV shows or keeping you up-to-date on Netflix Originals like Stranger Things, but without live coverage, it’s for sure missing some traditional TV needs.

It’s pretty obvious that Netflix is a screaming deal when it comes to pure quantity, but if you’re still not ready to commit, you can try it free for 30 days.

That’s a whole month of free content. Plus, you can cancel anytime online with no consequences.

How much is Netflix?

One great thing about Netflix is that no matter which plan you choose, you get the same awesome content—over 200 movies, TV reruns, and Netflix Originals. We think that’s pretty sweet.

So why pay for the more expensive packages? It all comes down to the streaming quantity and quality.

See, Netflix’s Basic package gets you only one stream, while the Standard package upgrades you to two. That means with the Basic service, only one person can watch at a time. Sounds a little more like the start of a battle royale than a relaxing night of your favorite shows.

If the idea of sharing even two streams makes you start to sweat, you might snag the Premium package. For only three dollars more, you’ll double your available streams. And with four simultaneous streams, you should be able to watch whatever you want without seeing the dreaded “You’ve reached your limit” screen. Score!

Here’s the skinny: Netflix is not a cable replacement. If you love reruns, then it’s great, but Netflix doesn’t offer any live TV.

So if you’re looking for live sports or the next Bachelor episode, you should check out our guide to streaming services. If you just want to binge-watch, then go get Netflix now.

Whether you’re looking for a chick-flick or a horror night, Netflix’s got everything you need. Simply log in and you can binge-watch classics like Gilmore Girls or The Office (or find new shows to love) to your heart’s content.

One word of warning: reruns of old shows or movies aren’t guaranteed to remain on Netflix. The show’s contract can expire, and then it’ll disappear from Netflix with no warning.

Luckily, old shows often return once the contract is figured out, but not always. (Remember how Doctor Who suddenly left Netflix and resurfaced later on Amazon Prime Video? We sure do.)

No live sports but, still, some action

Netflix is not in the market of live sports. There’s no ESPN, TNT, or NFL Network, so if you’re looking for a streaming service to keep up with your favorite team’s season, keep looking.

While this is a bummer, there are still shows that sports fans will love. If you’re into the stories of triumph, try out ESPN’s 30 for 30 series—amazing documentaries that relive the greatest moments in sports history.

Or, if you need a show to please both the sports fan and the drama lover, try out Friday Night Lights. We love the underdog story, the drama, and the football.

We know it’s not live sports, but it’ll give you some of the best sports stories you’ll find—which is almost (almost!) as good.

Wanderlust, anyone? Netflix’s got you

While most streaming services are limited to the United States, Netflix works in over 189 countries. You’ll find different shows available in different countries, but there’s still content everywhere you go.

Netflix doesn’t offer any local channels. If you want local channels, you’ll have to check out another streaming service or pick up an antenna.

All you need to do is get yourself a digital antenna. The antenna picks up the local broadcast stations, which will get you channels like ABC and NBC for free. Sounds like a pretty good deal to us.

Netflix has come a long way from simply mailing out DVDs—its original content is amazing. (We’re talking about you, Stranger Things.) In fact, half the reason people sign up for Netflix is for its original movies and shows.

Honestly, even stellar services like HBO NOW, Hulu, and Amazon Prime Video can’t compare when it comes to original shows and movies (Netflix has an Academy Award under its belt—come at me).

Netflix is basically the o.g. of streaming services, so it’s no wonder its features are on point. Netflix offers options for multiple streams, tons of compatible devices, and ultra-HD-quality video.

Enough streams for the whole family

Netflix has streaming options for all types of Netflix users.

If you’re just looking to watch by yourself, the Basic package gives you the one stream you need. If you’re planning on sharing your account, though, you’ll want to snag the Standard package for two streams.

If two doesn’t seem like enough, then Premium is where it’s at. With it, you get four streams and peace of mind knowing you won’t be fighting to watch what you want.

Added bonus: you can download specific shows on Netflix for offline viewing and these don’t count against your number of available streams. It’s an option only on mobile devices, but you can keep the downloaded shows for seven days.

Netflix passes with flying colors when it comes to compatibility (well, almost. Sorry, Wii owners). Chances are you own at least one of these devices, if not more. With all this compatibility, you can seamlessly switch from your TV to your tablet to your phone without missing a second of your show.

Always clear but ultra-clear for a cost

We’ve tested Netflix on phones, smart TVs, and tablets, and all of them were awesome. From a purely practical standpoint, we didn’t notice any glitches, and we had a clear picture as long as our internet was running smoothly.

If you’re looking for a more technical explanation, look at the chart above. While the Basic package gives you, well, the basic experience, the higher packages can get you clearer, higher definition on certain shows. There are fewer shows set up for Ultra HD, but when you find one, it’s amazing.

Netflix has a pretty simple layout. We love it. It’s easy to use and customize to your tastes. Let’s take a peek inside together and see what we specifically like. 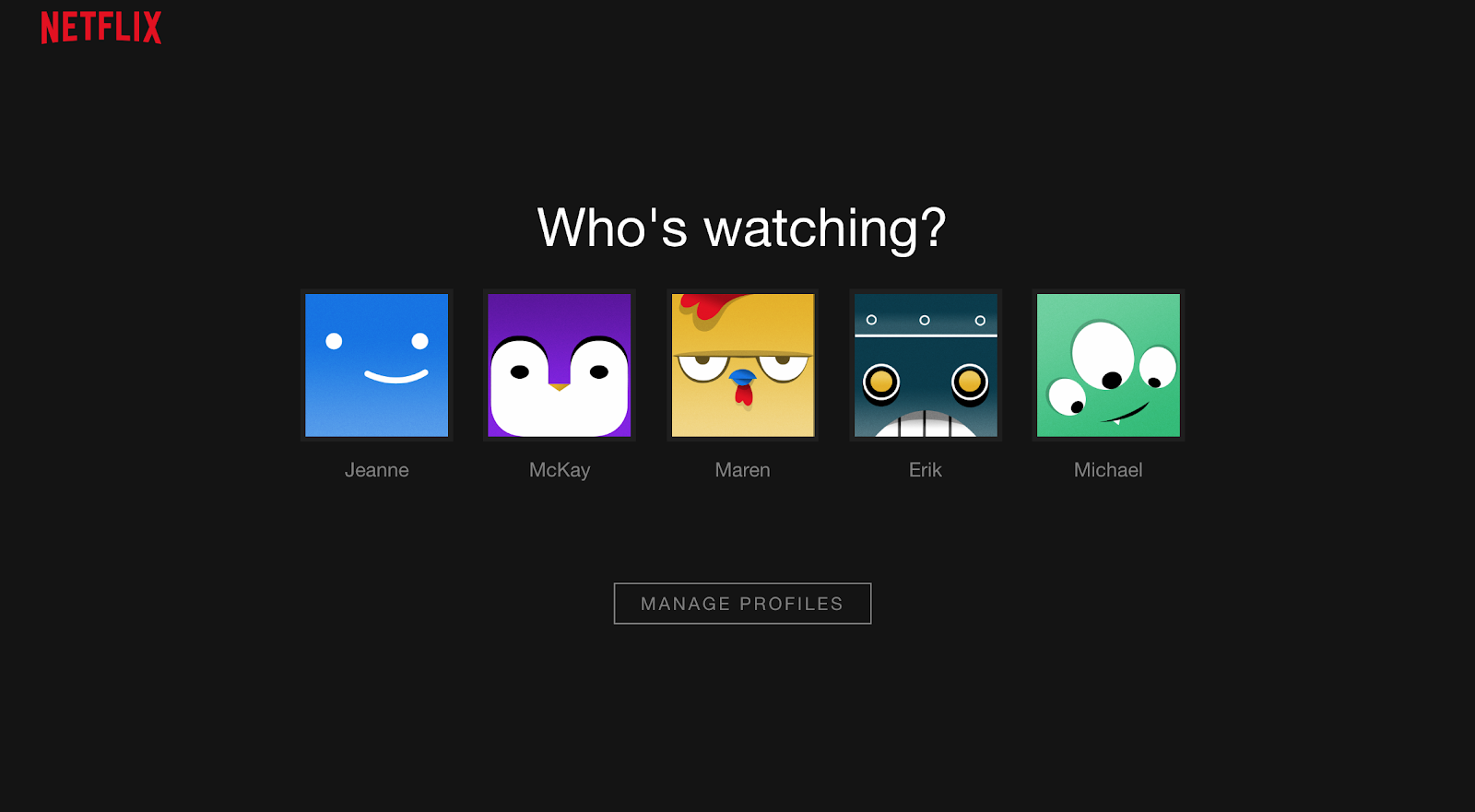 Netflix on a Google Chrome computer.

The first thing we like about Netflix is the ability to accommodate multiple users. You log in and then click on your specific icon. Basically, you enter your own personal Netflix profile. It allows the recommendations to be tailored to your specific interests and not your mom’s.

Plus, the profiles allow you to add kid restrictions while still reserving your own for less kid-friendly TV. Parenting for the win. 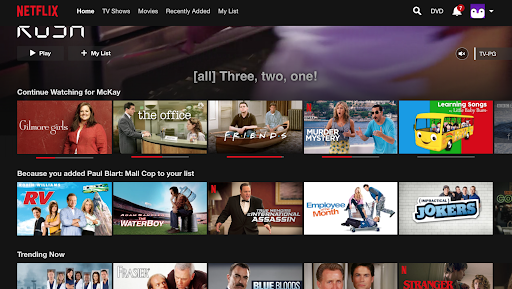 Once you get inside Netflix, there’s almost an overwhelming amount of TV and movies. Luckily, Netflix is ready to help you find what you’re looking for.

It also allows you to rate the titles you watch to refine the suggestions you see. It’s a pretty accurate system, and we love discovering new favorites. 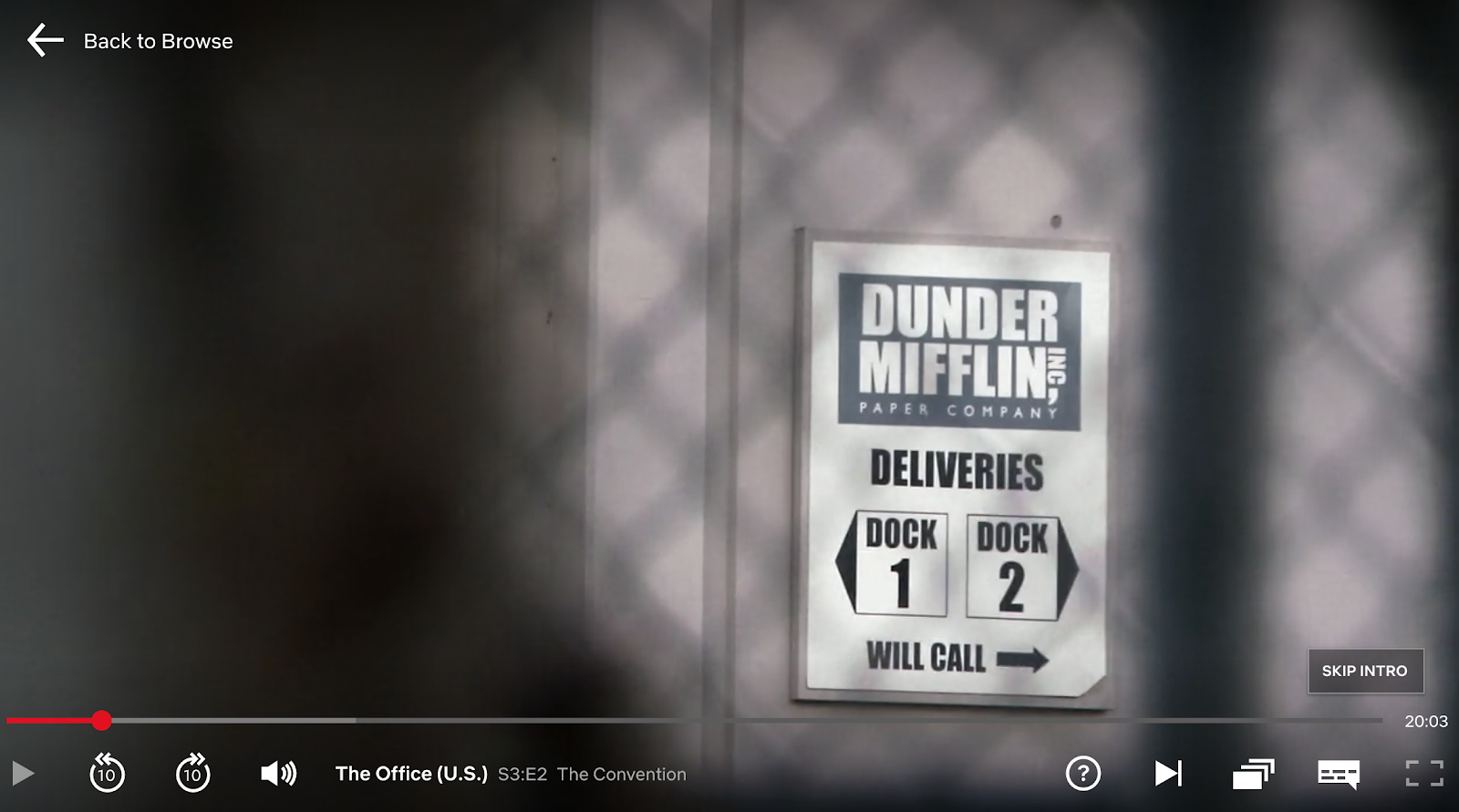 Bonus feature: Netflix takes away some of the annoyances of binge-watching with its awesome “Skip Intro” button. Let’s be real, after the first episode, a TV show’s introduction starts to get annoying.

But be annoyed no longer—simply click Skip Intro and it will deposit you right at the next new material. Score!

If you hate watching the same commercials over and over on other streaming services, Netflix is your new best friend. There are absolutely no commercials—ever. Just one of the reasons that Netflix is in the running for the GOAT.

There’s a reason everyone’s heard of Netflix—because it’s awesome. If you want more TV than you could possibly watch and brilliant new originals, Netflix will exceed your wildest dreams.

It’s not a total cable substitute, but with its commercial-free viewing, you might not even miss cable at all.

How much is Netflix?

Netflix is a streaming service full of movies and TV shows. While it doesn’t have live shows, it has a lot of great old stuff and some great original content.

How much is Netflix a month?

Netflix starts at just $8.99 a month with the most expensive package rolling in at $15.99 a month.

Lots. Netflix offers offline viewing for many of its TV shows and movies. You simply find the show you want on your mobile app and press the download button.

How long do downloads last on Netflix?

The exact answer actually depends on the title you’re downloading, but for the most part, downloads will remain for seven days.

Can I watch Netflix on my phone?