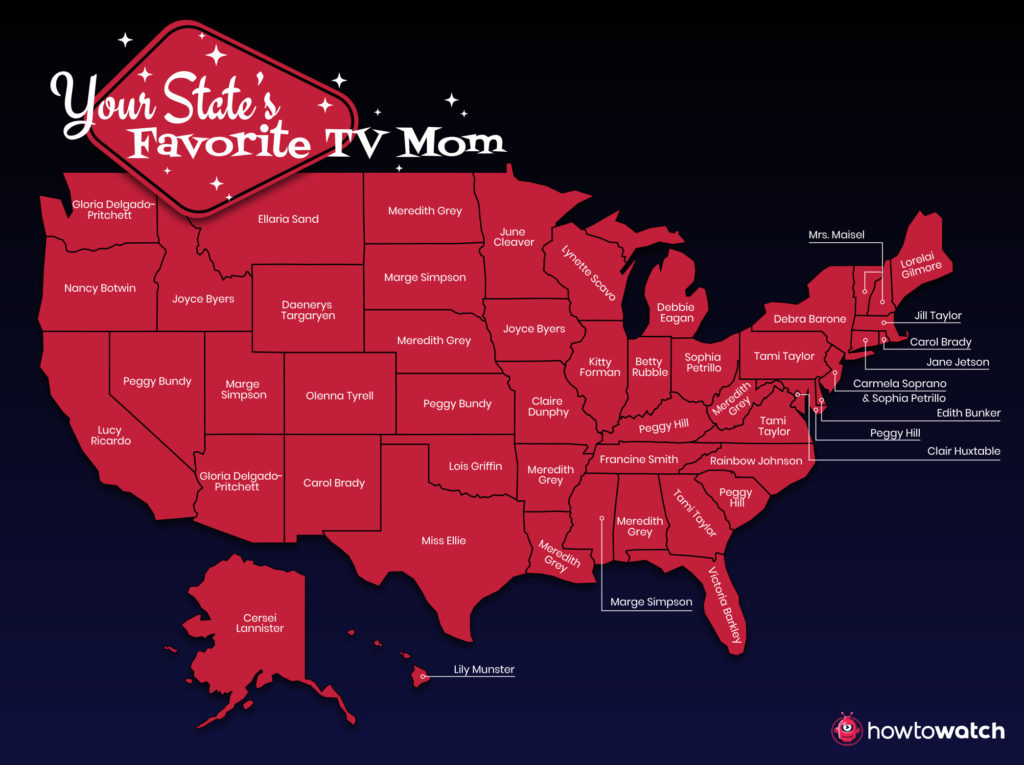 Mother’s Day is upon us—have you told mom how much she means to you? How about your favorite TV mom?

TV show moms are as American as baseball, apple pie, and, well, television itself. They’re with us every day, sometimes even more so than our actual mothers (cue the warm fuzzies).

As we did with last year’s Top TV Dads in Each State, HowtoWatch collected state-by-state data to determine the most treasured TV moms in the US circa 2019. We laughed, cried, and were genuinely surprised over some of our findings—dragons count as kids now, apparently.

We began with lists from Ranker, Rotten Tomatoes, and Parents to identify the most beloved TV moms of all time. Then, we added several mothers from today’s most popular TV and streaming shows to the list.

From there, we ran each name through Google Trends to identify which moms were searched most frequently in each state. You could say it was a real mother of a process.

We found that America loves these five types of TV moms:

The USA’s favorite TV mother is also a recent one. Grey’s Anatomy’s Dr. Meredith Grey has been a mom only since 2012, but she and her kids have already lived a lifetime of all-caps DRAMA.

On the more comedic side, Modern Family’s Gloria Delgado-Pritchett and Claire Dunphy are among the definitive moms of 2000s TV, as are Tami Taylor (Friday Night Lights), Rainbow Johnson (Black-ish), and Lorelei Gilmore (Gilmore Girls).

Miriam “Midge” Maisel, otherwise known as The Marvelous Mrs. Maisel, is a 1950s mom who was introduced to us in 2017, so she’s both modern and classic.

Lucy Ricardo (I Love Lucy), Edith Bunker (All in the Family), Victoria Barkley (The Big Valley), Carol Brady (The Brady Bunch), and Miss Ellie Ewing (Dallas) ruled the ‘60s and ‘70s. Seeing Lily Munster (The Munsters) here but not Morticia Addams (The Addams Family) stings our goth heart, but we’ll carry on.

The odd cartoon-mom out here is Betty Rubble of The Flintstones. Why no love for Wilma Flintstone? Her name is in the show title, Indiana.

She may be more “misunderstood” than “bad,” but Oregon’s fave mom choice of Nancy Botwin (Weeds) is akin to naming Breaking Bad’s Walter White father of the year (which New Mexico did last year, BTW).

As for Idaho and Iowa’s pick of Joyce Byers (Stranger Things), she may be devoted, but that is one stressful household.

Yes, Daenerys is technically a surrogate “mom” to dragons, but are you going to argue with her and her fire-breathing brood? Didn’t think so.

From the dawn of broadcast to the platinum age of television, TV moms have always been there for you.

(Well, The Marvelous Mrs. Maisel is a bit of an absentee mother—but she’s funny and stylish, so we’ll allow it.)

Most importantly: Don’t forget to pry yourself away from the tube and wish your real, non-TV mom a happy Mother’s Day!