Top TV Dads in Each State

What does your state’s favorite TV dad say about you?

Pay close attention. What do these three statements have in common?

You’ve guessed it—they’re all dad jokes. Over the years, we’ve laughed, we’ve cried, and we’ve certainly cringed with all the dads who have graced our television screens.

But which dads have managed to stick out and find a place in our hearts? We’ve collected data across the country to find every state’s most popular TV dad, just ahead of Father’s Day this year. Take a look to see which TV dad your state will be celebrating on Sunday! 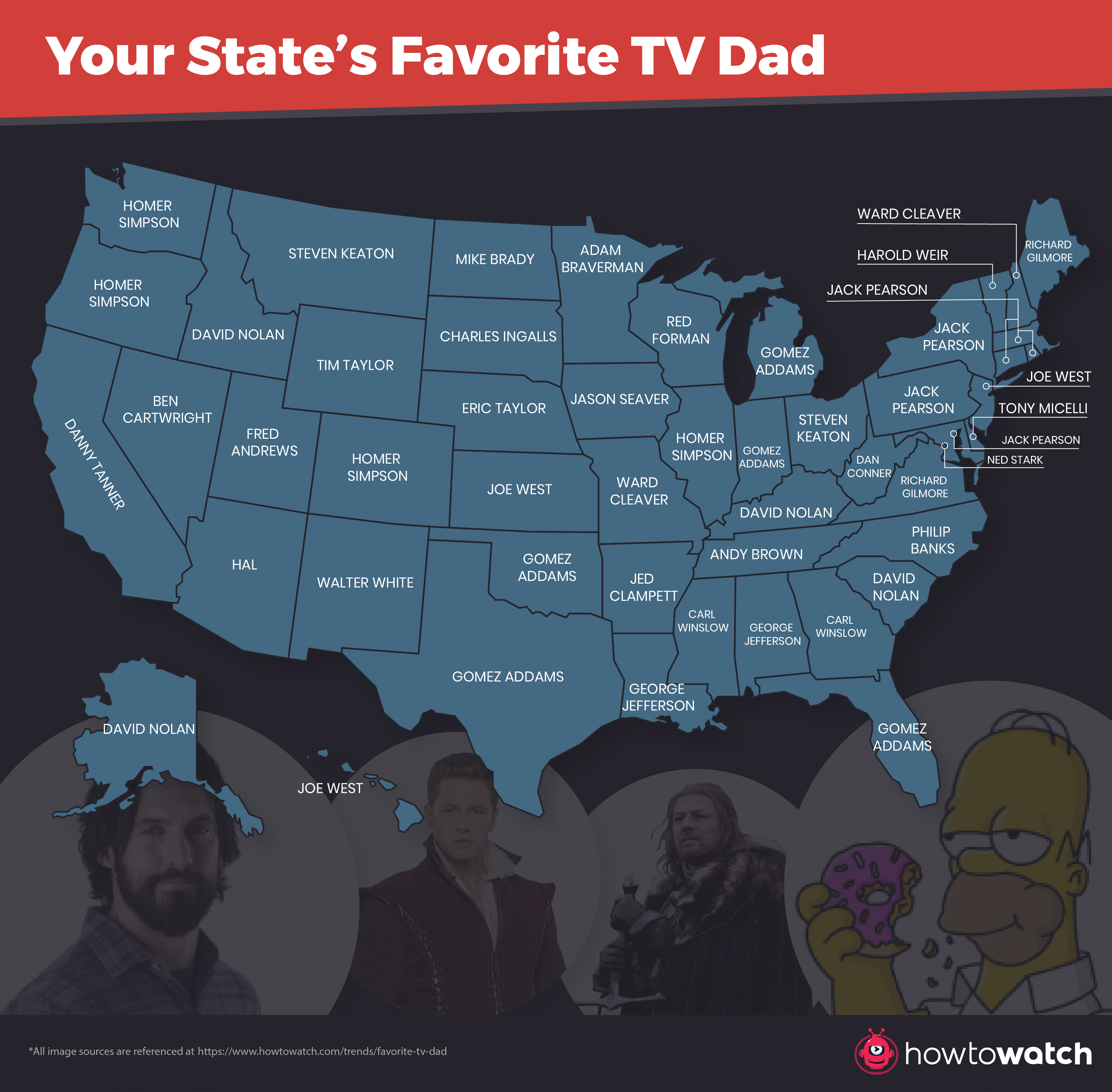 Two dads to rule them all

The two most popular Dads in our country couldn’t be more different, but it’s diversity that makes America so special, after all.

At least four states (Colorado, Illinois, Oregon, and Pennsylvania) agree Homer is a better dad than you might think.

Sure, Homer accidentally worked for an international terrorist (Hank Scorpio), and he tried to jump over the Springfield gorge on a skateboard once, but he’s secretly a great dad. Take this as proof, and try not to tear up a little.

When Bart gets his first girlfriend and corresponding first broken heart, Homer and Marge have this legendary exchange:

Marge: “Have you noticed any change in Bart?”

Though he’s got his demons, Jack Pearson is the kind of dad worthy of admiration. He puts his children before anything else, but at the same time we know he isn’t a perfect person, what with his drinking problem and all. Those from Maryland, Massachusetts, New York, Pennsylvania, and Rhode Island would likely agree.

It’s the combination of Jack’s fatherly compassion mixed with relatability that makes him such a beloved figure across America. Plus he also saved the family dog from a fire, which is pretty cool.

I’m getting weepy before even writing this. When Jack’s adopted son Randall is going through an identity crisis, Jack lovingly responds with the following:

“You’re adopted, and we don’t talk about that enough. ‘Cause to me, you are every part my son.” (to Randall)

Florida, Indiana, Michigan, Oklahoma, and Texas must have a thing for goth dads, and you know what? We really can’t blame them.

Of all the classic TV dads we’ve enjoyed over the years—we’re talking about dads like George Jefferson from The Jefferson, Steven Keaton from Family Ties, and Carl Winslow from Family Matters—it turns out Gomez Addams from The Addams Family is the most popular. Go figure.

You’ll remember Gomez Addams as the type of dad who empowered his children, no matter how peculiar their hobbies might be (looking at you, Wednesday!). You’ll probably also remember his undying devotion to his beloved Morticia—and his great moustache.

The amount of #RelationshipGoals moments Gomez and Morticia share together is simply astounding. A good dad treats his partner with the deepest respect, and Gomez did so with flying colors (and a little macabre humor).

Gomez: “Has anyone ever told you, you have the softest brown eyes?”

Morticia: “No. Besides, my eyes are blue.”

Gomez: “No wonder nobody ever told you!”

We always tend to gravitate toward the familiar, and our relationships with TV dads is no different. In fact, we found the same development with every state’s favorite 80’s movie—we all like things that hit close to home.

With so many depictions of southern California living in shows like Saved by the Bell, I Love Lucy, and The French Prince of Bel-Air, northern California needed someone to represent them. Danny Tanner wasn’t the hero San Francisco asked for, but he’s the hero they deserve.

He may not be as cool as Uncle Jesse or do Donald Duck impressions like “Uncle” Joey, but Danny Tanner offers a lot of love to his three daughters.

The sheer volume of cheesy, cringy, and undeniably sweet Danny Tanner moments is pretty incredible. I think we can sum it up in 10 words:

“Am I the raddest, baddest dad a kid ever had?”

Coach Taylor may not be from Nebraska, but he certainly embodies the football-loving spirit of the state. Nebraska might as well change its state slogan to “Clear eyes, full hearts, can’t lose.”

We’re not going to frame this quote at all; we’re just going to let it land:

“Every man at some point in his life is gonna lose a battle. He’s gonna fight, and he’s gonna lose. But what makes him a man is that, in the midst of that battle, he does not lose himself.”

First we compiled list of famous TV dads—thanks IMDB!  We put each dad into Google Trends to see the top-ranking states in terms of search for each title over the past 12 months.

Are we missing any dads?

Are there any TV dads you feel strongly about who didn’t make the cut? Defend your dad of choice in the comments below.