Top ‘80s Movie in Each State

What does your state’s favorite 1980s movie say about you?

Who doesn’t love a good ‘80s movie? Acid-wash jeans, voluminous perms, leg warmers—it truly was a simpler time. But we at HowtoWatch.com were curious to see which classic ‘80s movies took the cake (and the 16 candles on top) in each state. 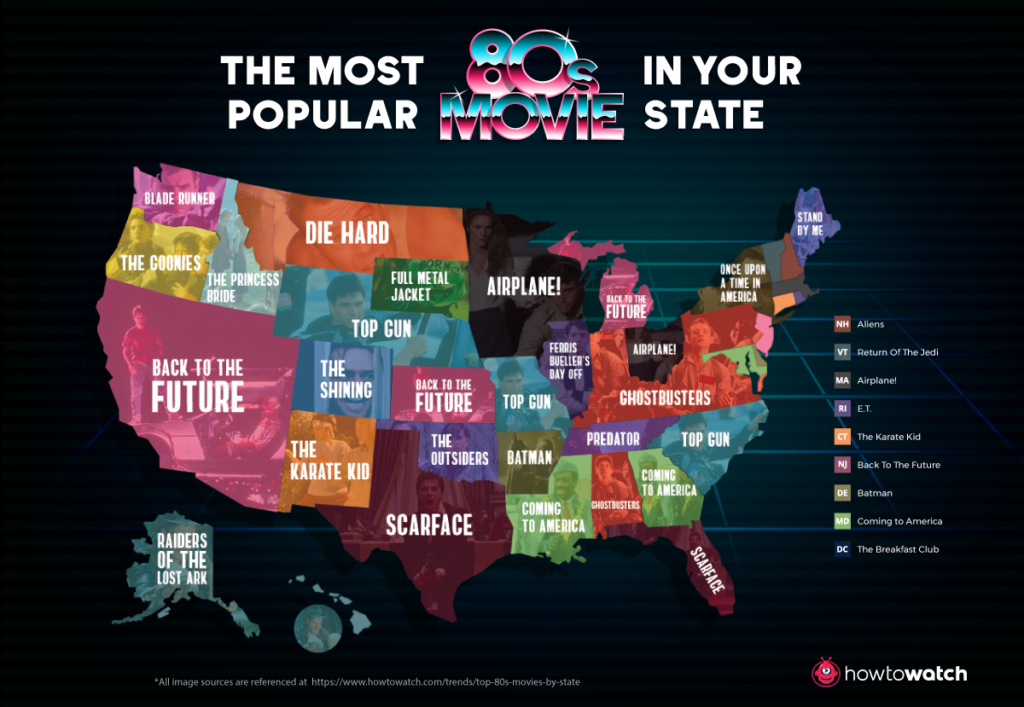 Unsurprisingly, classics like Back to the Future, Airplane!, and Ghostbusters were among the most popular ‘80s movies across the states. But there were also a fair number of surprises, like New England’s obsession with sci-fi. Each state’s favorite ‘80s movie says a lot about the people, culture, and tastes of the region, so let’s dive in and take a closer look at the trends we found.

It Must Have Been Love: States <3 films with local connections

One of the biggest trends we noticed is people tend to love ‘80s movies that were either filmed or set in their state. Here are a few states that give their local films some love.

Your state’s favorite ‘80s film could be a product of the trends and demographics within your state. Check out these interesting correlations.

Under Pressure: Geographic regions bandwagon around the same movies and genres

We think these states might feel a little peer pressure to fit in with their neighbors. Check out the large groups of states that tend to prefer the same movie or genre.

While the following states’ favorite ‘80s movies are all different, they do all tend to fall into the sci-fi genre. Forget Roswell—somebody send Mulder and Scully to New Hampshire!

Back to the Future a heavy favorite in the Southwest

There’s no denying that Back to the Future is one of the all-time greatest ‘80s movies. It’s popular across the country, but there’s an especially heavy concentration of time-jumping junkies in the southwestern US. Here’s the complete list of states that can’t get enough of Doc and Marty.

All jokes aside, the Midwest loves iconic ‘80s movies in which planes play a prominent role. Of course, Airplane! and Top Gun are favorites outside the Midwest too (we’re looking at you, Massachusetts), but we couldn’t help noticing the large cluster of plane movies right smack dab in the center of our map.

Interestingly enough, we noticed states that favor Top Gun form a sort of belt, moving mostly horizontally from Wyoming to South Carolina. Sure, Top Gun is one of the best ‘80s movies we know of, but we’re not 100% sure why it’s such a favorite in the middle US. One thing we do know? “Top Gun Belt” definitely needs to become a thing.

Here are the states where Top Gun is the number one choice of ‘80s flick.

Lots of love for action movies in the northern Midwest

Along the same lines, we noticed the northern Midwest really likes action movies, especially about the military. And before you say anything, yes—we know Die Hard isn’t technically a military movie. But John McClane is a police officer, and there is a S.W.A.T. team in it. That counts, right?

Who you gonna call?

Ghostbusters is undoubtedly one of the biggest hits of the ‘80s, but we noticed a particularly large concentration of Slimer fans in the eastern US. Why? Honestly, we’re not sure. Last we checked, there were no giant marshmallow men running loose in Virginia. But if you hear of one, please let us know.

Here are the states that swiped right for Ghostbusters:

We kind of get why Hawaii would like Raiders of the Lost Ark. After all, parts of the movie were shot in the 5-0. Alaska is a bit of a different story, though. Maybe Alaskans relate to the snowy Nepal scenes from the film, or maybe they just feel a little peer pressure from Hawaii. Whatever the reason, these two states can’t get enough Indy.

Don’t Stand So Close to Me: The odd states out

We can’t quite figure out why these films are favorites in the following states. We couldn’t find any reason why Arkansas and Delaware should love Batman so much (other than the fact that Batman is awesome), nor could we track down any common traits between the Karate Kid fans, Connecticut and New Mexico. But hey, you can’t help what you love.

To determine each state’s favorite ‘80s movie, we checked out IMDb’s list of 1980s films and sorted them by popularity. Then we cross-referenced the top 25 most popular films from our ‘80s movie list with Google searches in each state over the past year to see which 1980s movies are most likely to be fan favorites in your area. Here are our complete findings.

Do you agree with your state’s favorite 80s flick? Let us know in the comments!