Political divides, climate change, pineapple on pizza—we don’t agree on anything anymore. Can the Academy Awards bring us together as a nation?

At HowtoWatch, we decided to give it a try and harness the critical powers of AI and Twitter to forecast this year’s Academy Award winners.

Over two weeks, we dispatched AI bots to seek out positive and negative tweets regarding this year’s Big Five nominees: Best Picture, Best Director, Best Actor, Best Actress, and Best Original Screenplay. The Academy of Motion Picture Arts and Sciences has just under 7,000 members who anoint Oscar winners; Twitter has millions of hot takes—we believe the numbers are on our side.

We’ll tell you more about how we did it in a minute—right now, it’s time to unveil . . . 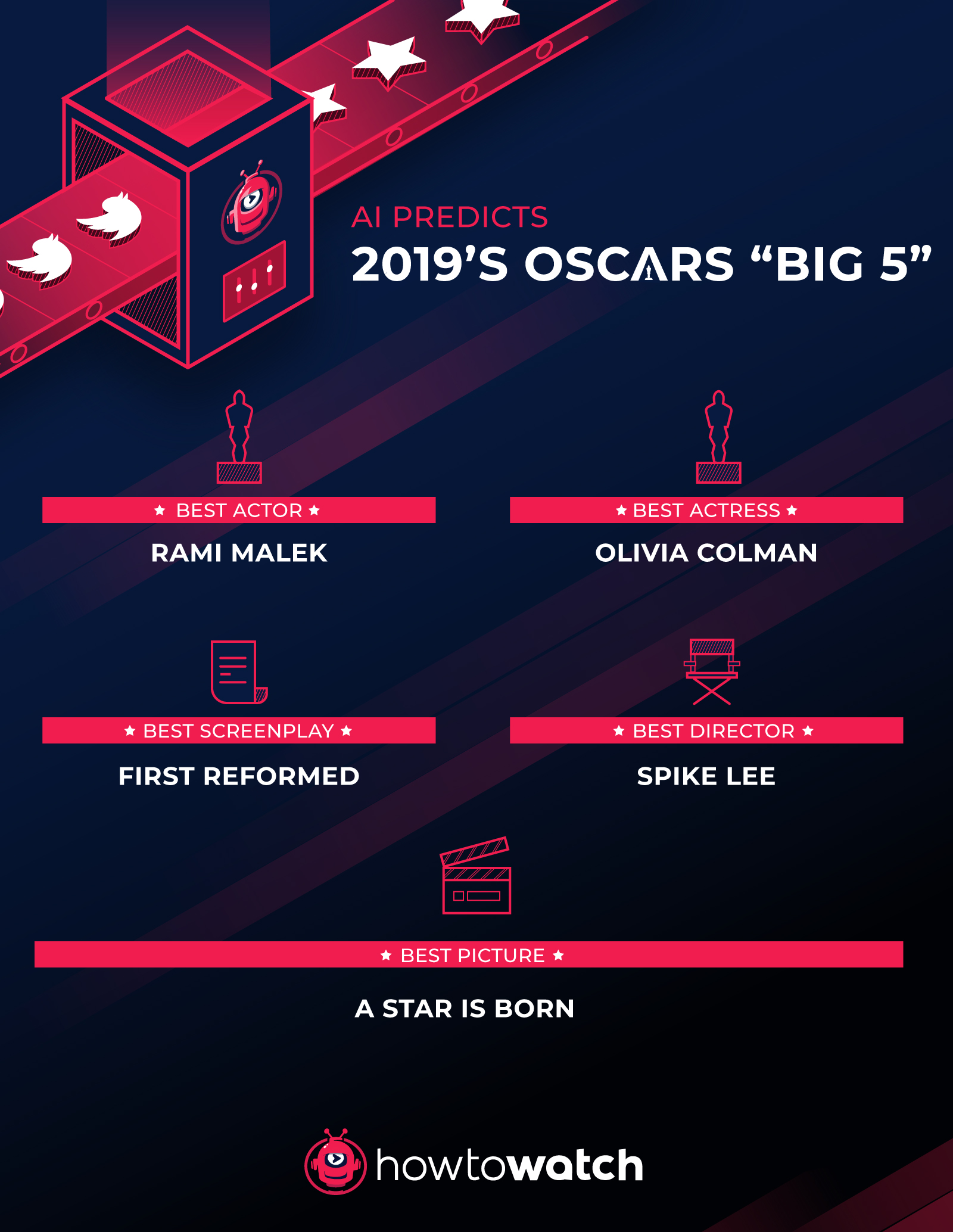 Malek’s visceral, uncanny portrayal of late Queen singer Freddie Mercury (which won him a Golden Globe earlier this year) lifted Bohemian Rhapsody above its rock-drama clichés, cementing its place as the highest-grossing musical biopic of all time.

The nominees:
Yalitza Aparicio, Roma
Glenn Close, The Wife
Olivia Colman, The Favourite
Lady Gaga, A Star Is Born
Melissa McCarthy, Can You Ever Forgive Me?

British actress Olivia Colman isn’t all that familiar to American audiences (you might know her from Netflix’s The Crown, or maybe even the 2006 flick Hot Fuzz), but she’s worked on 25 films and at least twice as many TV series prior to The Favourite.

Colman may be typecast now: The Favourite marks her third major role as British royalty, and she’s already won a 2019 Golden Globe award for her portrayal of 1700s matriarch Queen Anne.

Paul Schrader’s prolific, much-awarded career as a screenwriter dates back to the ‘70s and includes iconic films like Taxi Driver, Raging Bull, American Gigolo, and The Last Temptation of Christ, but a few missteps (anybody remember 1987 Michael J. Fox bomb Light of Day?).

First Reformed, about the struggles of a morally conflicted, faith-questioning Protestant minister, has earned Schrader some of his best reviews ever, as well as his very first Oscar nomination.

Despite having directed over 50 feature films and documentaries since the 1980s, Spike Lee has been nominated for an Academy Award only twice, both in the ‘90s.

A Star Is Born

Co-producer/co-writer/star Bradley Cooper’s exclusion from the Best Director category is considered one of the biggest snubs of the 2019 Oscars—even by Cooper himself. But A Star Is Born is still well represented with five nominations, including Best Picture.

This re-re-remake of a 1937 film about a rising singer (Lady Gaga) and her troubled mentor was also up for five Golden Globes, taking home one for Best Original Song. Also, A Star Is Born isn’t Gaga’s first Academy Award nomination: her “Til It Happens to You” was up for Best Original Song in 2016.

Once the 2019 Oscar nominees were announced in January, we began a sentiment analysis on Twitter based around the Big Five categories. For non-scientists, “sentiment analysis” is a lofty way of saying “We set robots loose to scour tweets for movie references, good and bad.”

Through AI, HowtoWatch essentially polled a vast pool of opinionated film critics (is there any other kind?) to establish a public consensus of who the winners should be, regardless of what the Academy thinks. In all, we analyzed 195,303 Oscars-related tweets.

Will the Academy and AI agree?

Obviously, the Academy will have the final word; we like to think of our AI predictions experiment as an Oscars “snub detector,” an early indicator of where the opinions of film professionals and filmgoers diverge.

It’s also possible that the audience’s favorites will line up perfectly with the Academy’s this year. But not highly probable—just ask disappointed fans of The Dark Knight, Saving Private Ryan, Pulp Fiction, and other past Oscar snubs.

We’ll all find out together when the 91st Academy Awards airs Sunday, Feb. 24 on ABC.