Seinfeld at 30: Everything You Need to Know

Master your Seinfeld “domain” on the show’s 30th anniversary.

Seinfeld, which ran for nine seasons from 1989 to 1997, is one of America’s most beloved (and quotable) sitcoms. It gave us the catchphrases “Not that there’s anything wrong with that,” “Serenity now!” and “shrinkage,” among dozens of others, yada, yada, yada.

The series premiered as The Seinfeld Chronicles on July 5, 1989, so HowtoWatch is celebrating the show’s 30th anniversary with our own chronicle of frequently asked Seinfeld questions.

For a comedy that was all about “no hugging” and “no learning,” there’s a lot to love and unpack.

Where can I watch Seinfeld?

All nine seasons of Seinfeld are on Hulu, which owns the streaming rights for the entire series. You can buy single episodes or full seasons digitally through several outlets, including Amazon and YouTube; we suggest purchasing full seasons because it’s the better value (you’ll save almost half the price in most cases).

If you want Seinfeld on Blu-ray, sorry, no soup for you: the series is still available only on standard-definition DVD.

On live TV, TBS runs Seinfeld blocks on weekdays between other classic sitcoms. You can usually catch an episode or two on local TV too. Like Newman in the hallway, Seinfeld is nearly impossible to avoid.

Which Seinfeld episodes should I watch?

With 180 episodes, Seinfeld can be a bit daunting for newbies—where to start? Taking critical rankings and fan accolades into account, as well as our own biases (we’re Team Elaine all the way at HowtoWatch), we’ve compiled nine must-see Seinfeld episodes, one from each season.

This is the episode that introduced the integral fourth member of the Seinfeld gang, Jerry’s ex, Elaine (Julia Louis-Dreyfus). Jerry attempts to “accidentally” run into a woman he’s interested in by “staking out” her workplace (also known as stalking in 2019). Not cool, but . . . Elaine!

In a self-contained episode that takes place entirely in a Chinese restaurant, Jerry, Elaine, and George (Jason Alexander) bicker hilariously while waiting (and waiting . . . and waiting) for a table. Writer Larry David threatened to quit if NBC, which hated the episode, didn’t air it.

Jerry, Elaine, George, and Kramer (Michael Richards) each go on their own solo misadventure, which doesn’t happen often in the ensemble world of Seinfeld. Jerry meets a naked Mets fan, Elaine goes to a lesbian wedding, George is hustled by a female crook, and Kramer wagers on a horse race. 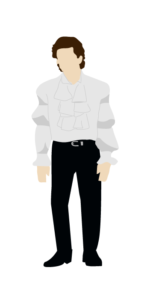 George pretends to be a marine biologist to impress a date, which goes well until they happen upon a beached whale in need of rescue. The episode ends with an epic recital of his heroism by George, producing a golf ball extracted from the whale’s blowhole. Bringing it all around: the ball was Kramer’s.

The DMV mistakenly gives Kramer a vanity license plate reading “ASSMAN,” which he assumes belongs to a proctologist. A string of wacky events later, Kramer ends up as that proctologist’s patient. This is also the episode that brought in fan-favorite Puddy (Patrick Warburton). 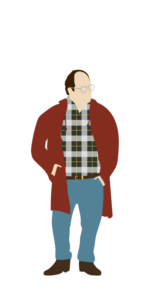 The episode that introduced one of Seinfeld’s most infamous side characters, an Argentinian soup purveyor with extremely strict rules about ordering at his stand. “The Soup Nazi” was based on a real New York soup vendor, who claimed Seinfeld “ruined” his business (it didn’t).

The title refers to George’s new girlfriend’s habit of abbreviating juicy details of stories with a dismissive “yada, yada, yada,” which became one of Seinfeld’s most popular catchphrases. The phrase was later referenced in tribute on other TV shows, including Buffy the Vampire Slayer and The Simpsons.

George’s perpetually angry father Frank (Jerry Stiller) adopts the mantra “Serenity now!” to help lower his blood pressure—but he always screams it, hilariously negating the calming effect. It’s a rarity for a show to introduce such an enduring catchphrase in its final season, but now try not yelling it.

What’s the deal with this show? The 9 most-googled Seinfeld questions

Seinfeld ended just before the internet became a thing in the late ‘90s, but it’s still one of the most-searched TV shows on Google. Using SEM Rush, we identified the nine most-googled questions about Seinfeld the show and a couple about Jerry himself.

1. How old is Jerry Seinfeld?

Jerry is 65, born in Brooklyn, New York on April 29, 1954. He was 35 when Seinfeld debuted, less than a decade after he began his stand-up comedy career. Not quite an overnight success, but close.

2. How many seasons are there of Seinfeld?

Seinfeld ran for nine seasons on NBC, the majority of which aired on Thursdays, the same night that launched NBC sitcoms like Cheers, Friends, and The Office. Jerry reportedly turned down $100 million to make a tenth season because, in numerology, nine means “completion.”

3. How much is Jerry Seinfeld worth?

Despite turning down a huge payday for another Seinfeld season, Jerry’s done—to paraphrase writing partner Larry David—pretty, pretty, pretty good for himself without it. At last count, Jerry was worth $950 million, just short of a cool billion, thanks mostly to Seinfeld syndication residuals. 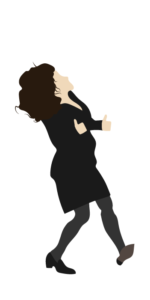 4. Is Seinfeld on Netflix?

Hulu bought the streaming rights for Seinfeld for $180 million in 2015, so you won’t find it on Netflix, like, ever. But you can watch Jerry’s latest series, Comedians in Cars Getting Coffee, on Netflix. It’s a talk show, though—not that there’s anything wrong with that.

5. Where was Seinfeld filmed?

Even though it’s considered one of the ultimate New York shows, Seinfeld was filmed almost entirely on Los Angeles soundstages—three, in fact: Universal Studios Hollywood, the CBS Studio Center, and Ren-Mar Studios. Exteriors, like Tom’s Restaurant, were shot in New York.

6. How many episodes of Seinfeld are there?

There are 180 Seinfeld episodes total, including the original pilot, The Seinfeld Chronicles. To compare, Friends made 236 episodes, Cheers served up 275, and The Simpsons have cranked out 662 (and counting). 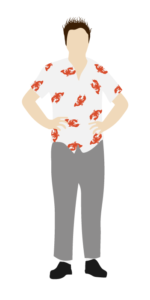 7. How tall is Jerry Seinfeld?

Jerry Seinfeld is an average 5’11”—though his poofy ‘90s hair probably made him an even six feet tall. He’s taller than Seinfeld co-stars Jason Alexander (5’5”) and Julia Louis-Dreyfus (5’3”), but shorter than Michael Richards (6’3”).

8. When did Seinfeld start?

Seinfeld debuted on July 5, 1989, as The Seinfeld Chronicles. Besides being about a group of friends who aren’t connected through work or family, Seinfeld also broke new sitcom ground by having those friends never “grow” or “learn.” It was It’s Always Sunny in Philadelphia 1.0.

9. Where can I watch Seinfeld?

As we covered earlier, you can watch Seinfeld on Hulu, Amazon Prime Video, YouTube, Google Play, Vudu, iTunes, TBS, and in syndication on local TV stations. All nine seasons are also available on standard-definition DVD, but not Blu-ray—no, not even for Festivus. 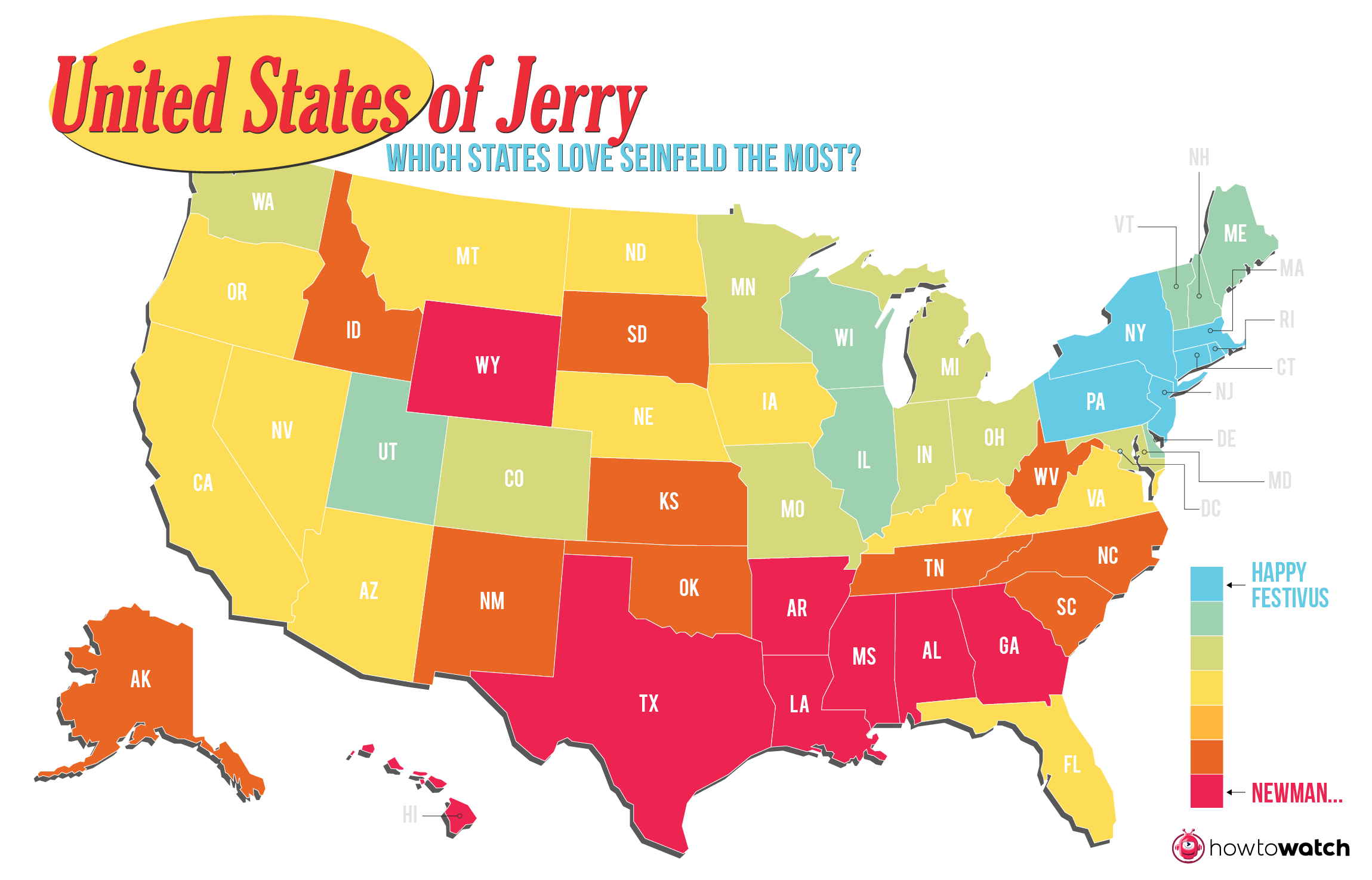 Who loves Seinfeld most?

By state: We used Google Trends to find which parts of the US most frequently search for Seinfeld, going back as far as 2004 (when Google Trends launched). Even though, as we’ve already pointed out, Seinfeld wasn’t actually filmed there, New York loves Jerry and the gang the most. Mississippi, on the other hand, does not care for these city folk at all.

By demographic: For this group, we looked at data from YouGov to determine the age and gender of Seinfeld fans. Baby boomers (55–75) barely edged out Gen Xers (40–55) and millennials (23–38), and 10% more men like Seinfeld than women. Oddly, Larry David’s unofficial sequel to Seinfeld, Curb Your Enthusiasm, skews younger—but still about the same with dudes.

Happy 30th from HowtoWatch, Seinfeld! We would have bought a gift, but the Jerk Store called and said they’re running out of you (there’s a Seinfeld catchphrase for every occasion).