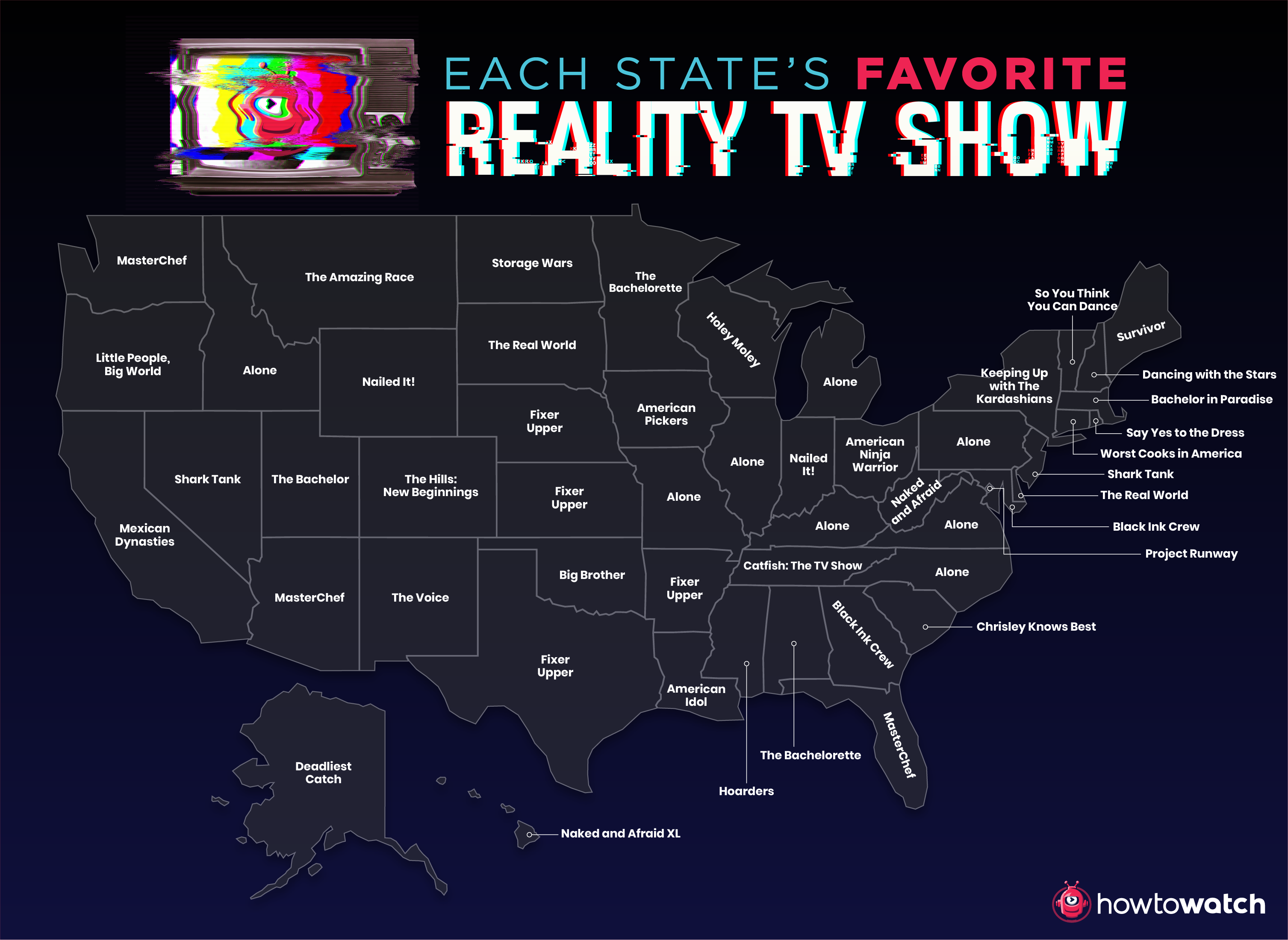 Reality TV shows have been with us for decades, despite having little to do with actual “reality.” They’re mostly scripted affairs guided by storytelling professionals, but who cares? We love reality TV, anyway.

Here at HowtoWatch.com, we’ve exhaustively researched—OK, run TV titles through Google Trends—to find out which reality TV shows America loves most, state by state. What we came up with was a pleasantly mixed bag of popular hits, odd surprises, and zero Real Housewives.

Here are the types of reality TV shows the US is obsessively searching:

Survival and the outdoors

The History Channel’s Alone, wherein regular folk attempt to survive the wilderness, topped our list with eight states. The even-more-primal Naked and Afraid and Naked and Afraid XL each scored one state, as did the McDonald’s of man-vs.-nature series, Survivor.

On the recreational side of the great outdoors, The Deadliest Catch is Alaska’s king-crab favorite, while Montana runs with The Amazing Race (it’s filmed mostly outside, so it seemed to fit in this category).

Fixer Upper, the HGTV series starring Chip and Joanna Gaines, is a hit with four states, and the only legit home-improvement show we found. Is the renovation craze finally over?

Maybe viewers are more into stuff than homes lately: Mississippi can’t part with Hoarders, and North Dakota is all-in on Storage Wars. Meanwhile, Iowa’s curiosity is piqued by American Pickers.

Three states love the culinary drama of Fox’s MasterChef, but only one had the intestinal fortitude for Food Network’s Worst Cooks in America. Two states are sweet on Nailed It!, Netflix’s ornate cake-off.

VH1’s Black Ink Crew is more about tiffs and tantrums than tattoos, but Georgia and Maryland are into it. TV’s most artistic and fashionable show, long-running series Project Runway, still stuns the District of Columbia.

Competing for love and money

It could be argued that all of the shows on this list are competitions, but some are more obvious than others. On the love-is-a-battlefield side, we didn’t expect The Bachelorette to be more popular than The Bachelor, let alone Bachelor in Paradise.

Rhode Island still believes in love, however, and Say Yes to the Dress.

Remember when colorful karaoke showdowns like American Idol and The Voice ruled the airwaves? Not so much anymore—and the same could be said for Dancing with the Stars and So You Think You Can Dance. They each get only one state apiece.

Is it fair to place the hardcore athleticism of American Ninja Warrior alongside the dad-bod chaos of Holey Moley? No, but Ohio and Wisconsin have, anyway. On opposite ends of the country, Nevada and New Jersey appreciate the cutthroat competition of Shark Tank.

Since 1992, MTV’s The Real World has invited us to virtually hang out with sketchy characters we’d probably never tolerate in person, spawning modern reality TV. Delaware and South Dakota are still totally here for it.

Meanwhile, recent revival series The Hills: New Beginnings has wooed Colorado, Big Brother is all up in Oklahoma, and Catfish: The TV Show has hooked Tennessee.

In the subcategory of “Famous for No Apparent Reason,” does anyone understand what Chrisley Knows Best? South Carolina does, apparently, and it’s not taxes. Over in California, newbie Bravo series Mexican Dynasties rules, while Oregon is bigly into TLC veteran Little People, Big World (they’re not terrible, BTW—we just ran out of categories).

Meanwhile, why is New York interested in vapid West-Coast snoozefest Keeping Up with the Kardashians? We find it hard to believe that New Yorkers would spend hours on a dull reality show that’s not Long Island Medium.

One nation under reality

We’re more than a little shocked that Floribama Shore didn’t show up in at least two states, but enough about us: what do you think about your state’s favorite reality TV show?

Did your neighbors get it wrong? Are you cool with their pick? Are you thoroughly disappointed in America as a whole and just going back to your Great British Bake Off binge? Let us know in the comments below.